On August 13th, the City of Sandy Springs hosted a Transit Signal Priority workshop showcasing their work with the Georgia Smart Communities Challenge. This informative event covered promoting transit as a sustainable safe reliable mode of transportation and overviewed the work completed by project members over the one-year program. Project members, researchers, and interns have been working to “Streamline Suburban Transit” by improving MARTA Route 5 through the utilization of an Application Programming Interface (API) for Transit Signal Priority (TSP).

Project member Caitlin Shankel gave an overview of the project activities, including an overview of the project’s accomplishments so far. Georgia Tech researchers Michael Hunter and Kari Watkins offered information about their research and commented on the improvements their research might offer to community members and key stakeholders. Some advantages to running TSP through an API include improving on-time performance and increasing ridership and better serving riders.

A panel of transit operators, including representatives from GDOT, MARTA, Gwinnett Transit, CobbLinc, and ATL/SRTA, were able to give additional context about these systems, as well as comment on the future of TSP and how to plan for it. As the event closed with questions to the panel from audience members, next steps for project development that were discussed included exploring signal changes, increasing data resolution, advancing the TSP algorithm and studying other sites with varying characteristics. 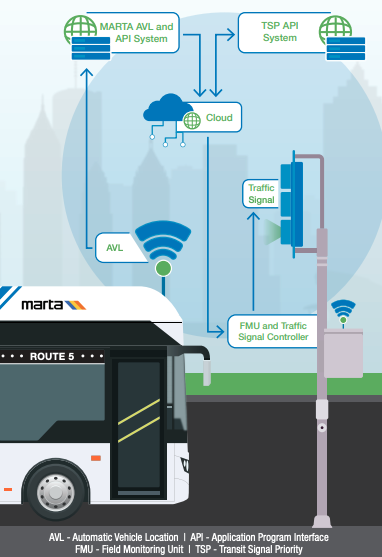