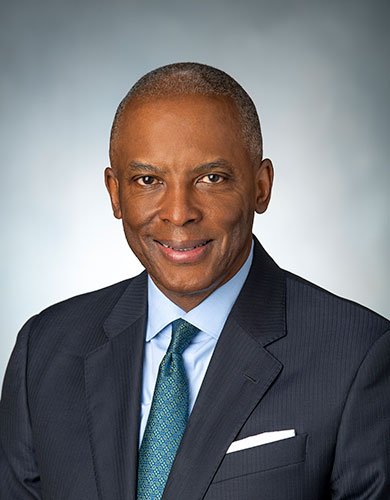 Chris Womack was named president of Georgia Power in 2020. He leads Georgia Power in serving its 2.6 million customers across the state. The company is the largest subsidiary of Southern Company, one of the nation’s leading energy providers.

Prior to his current role, he served as executive vice president and president of external affairs for Southern Company where he led overall external positioning and branding efforts including the company’s public policy strategies and oversaw the company’s governmental and regulatory affairs, corporate communication initiatives and other external and strategic business engagements.

Prior to joining Southern Company, Womack worked on Capitol Hill for the U.S. House of Representatives in Washington DC. He served as a legislative aide for former Congressman Leon E. Panetta and as staff director for the Subcommittee on Personnel and Police for the Committee on House Administration.

Womack is a member of the board of directors of Essential Utilities, Inc. He currently chairs the board of the East Lake Foundation, is on the national board of The First Tee and is the incoming chair of the board for the Alliance to Save Energy. Womack has chaired the Atlanta Convention and Visitors Bureau board and the Atlanta Sports Council. He has also chaired the board for Communities in Schools of Georgia and served as a member of the Children’s Healthcare of Atlanta board.

He has received numerous honors, including the Johnny Morrow Endowment Foundation “Man of the Year” (1996); SCLC Leadership Award (1998); Distinguished Alumni, Western Michigan University (2003); Black Enterprise 100 Most Powerful Executives in Corporate America (2012) and Black Enterprise Magazine’s 75 Most Powerful Blacks in Corporate America (2005). He also received the Boy Scouts of America Whitney M. Young Award for Public Service (2007); the Boy Scouts of America Silver Beaver Award (2010); the Black Enterprise/Porsche Intelligent Performers Award (2010); the National Award of Merit from Alpha Phi Alpha (2011); and Let Us Make Man Community Service Award (2019). He is a member of the Leadership Atlanta class of 2000 and the Leadership Birmingham class of 1990.